Watch the Video from Monday Night

Because of COVID-19 issues and to provide a safe environment for our supporters, RTL of NCI made the decision to reformat the annual fall banquet as a program-only (on September 21st, 7:00 to 8:30 pm at Warsaw Community Church). We are providing the opportunity for you to attend in-person or watch online. Please read through the following information and register to attend in-person or to watch online.

Also, take time to scroll to the bottom and see our generous event sponsors, and while there won't be food at the event this year, scroll down to the bottom of this page to find information on how you can enjoy Shawnanigans' food and support Right to Life on Monday, September 21st. 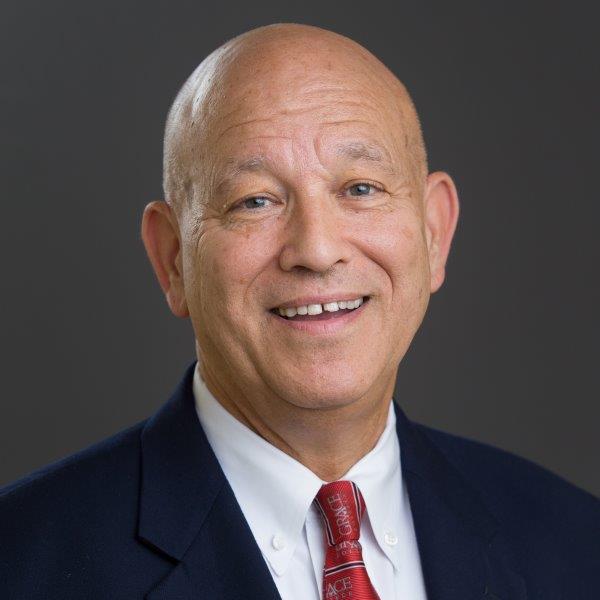 Dr. Katip is president of Grace College in Winona Lake. He has been an outspoken supporter of Life and Right to Life. He currently serves on the Right to Life of North Central Indiana Advisory Board. 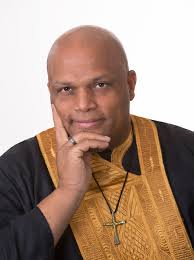 Hear his message that God can use anyone, including an unwanted child of a seventeen-year-old prostitute.

Attend this event in:

Dr. Ron Archer has been connecting with audiences ever since he started preaching Sunday nights in a Cleveland church when he was sixteen years old. These days he travels the globe with a message that remains the same: that God can use anyone, including someone like him - the unwanted child of a seventeen-year-old prostitute.

Ron grew up in the early 1960's in Cleveland. He was almost aborted, sexually abused by a babysitter, teased unmercifully by classmates for his stuttering, and neglected at home. Ron wanted to die. At age ten, he put a loaded revolver to his head and pulled the trigger. The gun didn't fire.

With the help of a teacher who introduced him to the Bible, Ron discovered Jesus Christ and finally found his voice. Now a celebrated public speaker, Ron's captivating presentation brings listeners into the storyline and lets them experience the pain of a crisis pregnancy, the vulnerability of a child experiencing insecurity at home, the results of abuse during childhood, and share the hope that can only come from God.

Dr. Archer is not your traditional keynote lecturer; he has been described by one Fortune 500 executive as a "life altering encounter and an emotional/intellectual experience where all of your faculties are fully charged."

Rather than allow COVID-19 concerns to shut down the 2020 Fall Legacy of Life Banquet, we decided to pivot to a combination of an IN-PERSON and ONLINE event — so you have the option of attending in-person or from the comfort and convenience of your home!

The Board of Directors and staff of Right to Life of North Central Indiana invite you to join us on September 21st for an opportunity to hear what is happening in the pro-life movement in north central Indiana and how you can be a part of making a difference in the lives of women experiencing unexpected pregnancies and saving babies (born and unborn)!

While requirements could change based on state guidelines on September 21st, this is the expected COVID plans for guests attending the in-person event:

Ø  The wearing of face coverings is strongly recommended for everyone (without a health exemption) at the event when not seated.

Ø  Sanitizing stations will be available for hand cleansing as guests arrive.

Ø  Social distancing of 6 feet will be required.

Ø  Setup for seating will be in ones and twos with 6 feet between each setting of one or two chairs to accommodate those attending as a couple or single (larger immediate family units will be accommodated as much as possible).  Call 574-306-7406 or email info@nci4life.org for further clarification.

IMPORTANT: Due to Coronavirus concerns, Right to Life had to convert our fall in-person fundraising banquet into a combination in-person and online event. The fall Legacy of Life banquet is mission-critical to our lifesaving work. Over $100,000 is normally raised at this event. Had the Legacy of Life banquet been completely canceled, it would have had a negative impact on our ability to do the work to save lives. To help in this crucial time, please register and attend in person or online (if you have a computer or mobile device and an internet connection, you can easily join us) — and spread the word to everyone you know!

Check Out Shawnanigans Before the Program for a Great Dinner!

There won't be food at the Legacy of Life this year. However, you can still have great food and support Right to Life. Shawnanigans Catering will have their food truck at Clearwater Car Wash (1055 Husky Trail, Warsaw) from 11 am to 7 pm on Monday, September 21st. Thirty percent of all sales go to Right to Life!!

Scroll down to the bottom of this page for a $5.00 coupon. 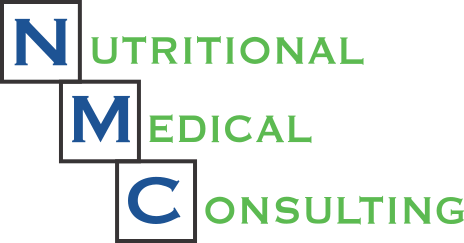 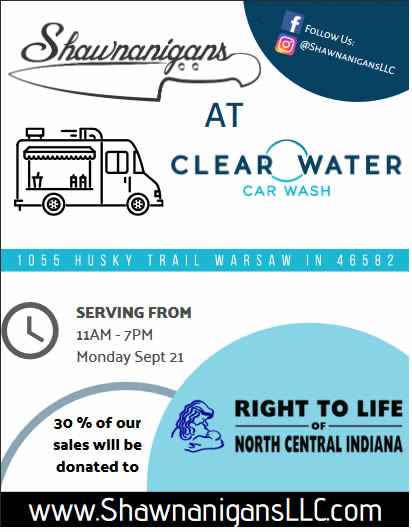 Thanks to Shawnanigans for supporting RTL of NCI in this way. Click here to download and print a $5.00 off coupon on $25.00 or more purchase at Shawnanigans.