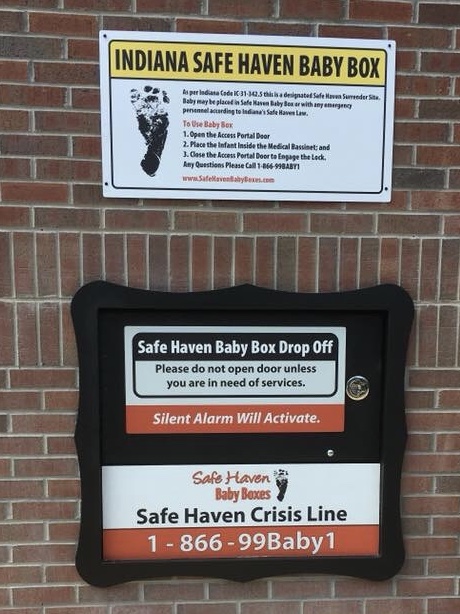 A goal was announced at the 2018 fall Legacy of Life Banquet to raise funds for two Safe Haven Baby Boxes in north central Indiana as well as raising awareness for the Safe Haven hotline number.

We have appreciated the opportunity to partner with many individuals and organizations such as Kristi Ormsby, Warsaw Ministerial Association, Whitley County Republican Women’s Club, Knights of Columbus in Warsaw and Columbia City, and Parkview Health.

The goal of two baby boxes in north central Indiana has now transformed into 4 (Warsaw, Syracuse, Logansport and Columbia City) and now we are working towards a fifth box (Marion, IN).

To find out more about Safe Haven Baby Boxes, Inc. you can check out their website here.

Beginning June 2019, billboards were put up in six of the north central Indiana counties (Whitley, Kosciusko, Grant, Wabash, Fulton, and Cass). Check out the billboard design.

If you would like to support these efforts, you can give a tax-deductible donation. Checks can be made payable to RTL of NCI (note which baby box campaign you want to donate to on memo line) and mailed to PO Box 1162, Warsaw, IN  46581. You can also give online.

Thanks to our Platinum Banquet Sponsors